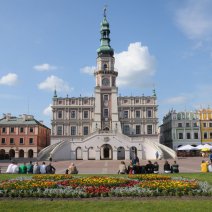 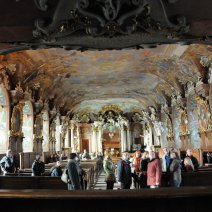 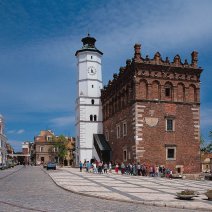 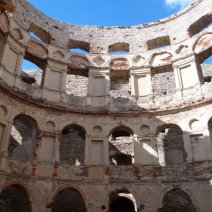 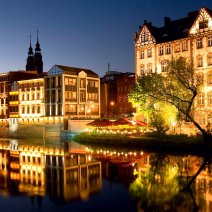 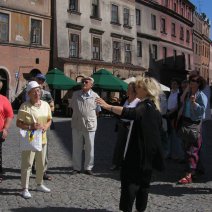 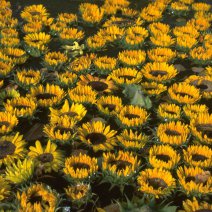 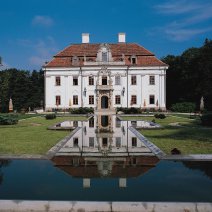 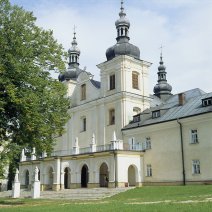 Arrival in Warsaw, biggest city of Poland. Overnight in Warsaw.

After breakfast, a sightseeing tour of Warsaw with the most interesting monuments and sites incl. the Old Town with Royal Castle placed on UNESCO’s Heritage List, the Royal Route with old churches, palaces and villas, and the Palace of Culture and Science, the symbol of the city. In the Royal Castle’s interiors you can admire the works of famous Italian painter Canaletto, showing 18th century Warsaw. His paintings helped to rebuild the Old Town, totally destroyed during the 2nd World War.  You leave Warsaw and drive to Kazimierz Dolny, the city of artists. It combines splendid architecture with picturesque landscape, which can be admired during a boat cruise on the Vistula River. In the Old Town there are a lot of 500- year-old tenement houses. Nałęczów, the famous spa resort is also worth a visit. Overnight in Lublin.

After breakfast, a sightseeing tour of Lublin, an administrative centre of the voivodship, the capital of the Lublin Region and the biggest town in Eastern Poland. Established in the Middle Ages, the Old Town is one of the finest urban complexes of its kind in Poland. Worth a visit is also the Old Town Hall, so-called Crown Tribunal, the Gothic Dominican Church and Monastery complex, Grodzka and Cracow Gates, the Neo-Gothic castle and the Trinitarian Tower which is one of the most characteristic city landmarks. In the afternoon, we visit the Museum of the Zamoyski Family in Kozłówka, one of the most beautiful palaces and park complexes in Poland with very well preserved interiors from the turn of the 19th c. In the former coach-house is housed the only Europe's Gallery of the Art of Socialist Realism. This collection contains over 1600 sculptures, paintings, drawings, posters and fabrics including the works by leading Polish artists. Overnight in Lublin.

You leave Lublin and drive to Zamość – a jewel of Polish Renaissance. The Old Town complex has been entered on UNESCO’s World Heritage list. The city’s urban layout was designed to copy the plans of an ideal Italian urban pattern. It is Poland’s best preserved Renaissance town and has retained its attic-topped burgher houses, magnificent town hall, churches and fortifications. After the sightseeing tour of Zamość we visit Zwierzyniec, the biggest city inside the Roztoczański National Park. The next station is Jarosław, where, in the past, the biggest corn market in eastern Europe was organized. Worth a visit is the Town Hall from the 16th century, once in possession of the rich Orsetti merchant. Overnight in Przemyśl.

After breakfast, a city sightseeing tour of Przemyśl, situated near the border with Ukraine, a city of many cultures, with many secular and sacral buildings. St John’s cathedral, originally Gothic with later Baroque alternations, is one of the major highlights. Przemyśl Fortress is Europe’s third largest stronghold of this kind after those in Antwerp and Verdun, representing the highest achievement of military art from the 19th and 20th centuries. You leave Przemyśl and drive to Łańcut, where stands one of the country’s most important magnate residences. The palace in Lańcut was built in the early 17th century. It is surrounded by a system of fortifications with bastions and by a landscape park from 19th century. In the old stable and coach-house building there is one of Europe’s largest museum of carriages. The next station is Leżajsk, where you can admire the 17th century monastery, the work of an Italian master Pellaccini and the famous baroque organ. Overnight in Sandomierz.

Day 6: The heart of Polish Tuscany

After breakfast, a sightseeing tour of Sandomierz, perhaps the most beautiful city of the Polish Tuscany and ranking among the finest Polish towns, picturesquely falling in terraces down the Vistula bank. The cathedral erected in 1360 is one of its highlights. The superb town hall combines elements of Gothic, Renaissance and Baroque styles. The late Romanesque St Jacob’s church, the Opatowska Gate, the Castle - erected on the place of the former fortress from the 10th century and the Queen’s Jadwiga ravine are also worth seeing. You will have an opportunity to visit the underground route, which leads through underground merchant stores from the 15th - 17th centuries, running under the burgher houses in the Market Square for about 500 m. Drive to Cracow. On the way, a visit to Baranów Sandomierski, where the perfectly preserved late Renaissance magnate residence from the turn of the 16th century can be admired. Overnight in Cracow.

A city sightseeing tour of Cracow, which between 1038 and 1596 remained a royal metropolis. We start our tour in the Old Town and visit the Main Market Square, the Cloth Hall and St Mary’s Church, whose the main altar was carved in limewood by a famous sculptor Veit Stoss. On the Wawel Hill, you can admire the majestic Royal Castle and the Royal Cathedral, with the pearl of the Renaissance, the Sigismund Chapel. The castle’s construction erected in early 16th century in the style of Italian palazzo became a model for many Polish castles. In the royal chambers are exhibited so-called arras – unique tapestries ordered by Sigismund Augustus. In the afternoon, you can visit the world-famous UNESCO salt mine in Wieliczka. You can enjoy your farewell dinner at one of the local restaurants in the Old Town. Overnight in Cracow.