Track profile: Almost no highway passages, some curvy tracks in the lowlands. With stronger wind gusts must be expected near the coast. Relatively little traffic. Risk of traffic jam around the Gdańsk.
Duration: 7 days
Travel distance: approximately 1,750 km in Poland
Recommended period: May-June and September. July and August are uniform throughout Poland summer holidays, which has a high traffic result

Nature, sea, beach… The ocean and Pomerania are the treasures of the Baltic Sea and the Northwest offers a varied landscape like no other region in Poland. The Polish Baltic coast is 528 kilometers long and wide sandy beaches are changing with deep forests, dunes and romantic cliffs. Many small fishing villages exude a special charme and time seems to stand still there. Much busier things are in the famous and renowned spa resorts at the seaside, where restaurants, shops and promenades attract visitors. The Hanseatic cities of Gdańsk and Szczecin are equally exciting and offer numerous attractions and sights. The Baltic hides a large treasure and this is amber. This „Gold of the Baltics“ is found still today in the region and is used in decoration and impressive craftmanship. Away from the cities, there is pure nature. The lagoons, bays, national parks, coniferous and deciduous forest are a paradise for motorcycle touring riders. Of course, it is also the Kashubian Switzerland which should not be forgotten, because here you can still discover and admire the culture of a small Slavic ethnic group. 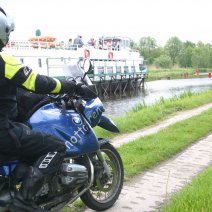 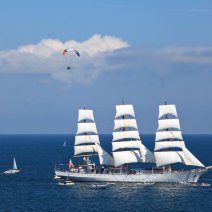 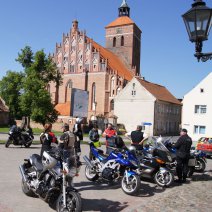 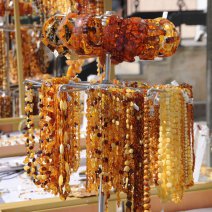 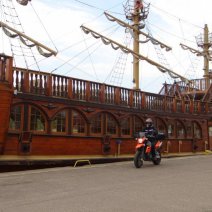 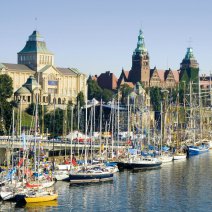 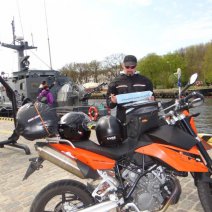 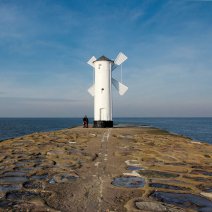 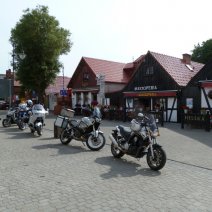 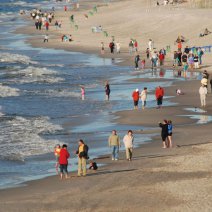 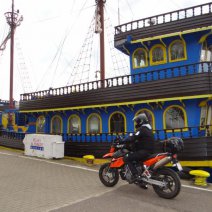 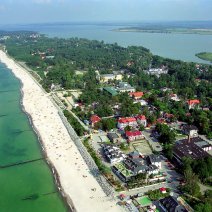 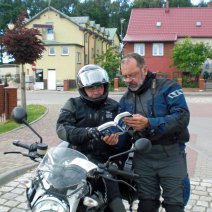 (Distance app. 150 km in Poland) The journey starts with a city walk in Szczecin. Although located in the hinterlands, Szczecin has a deep-sea port and many valuable and interesting buildings, which are almost all associated with seafaring tradition and sea trade. In the charming and colorful Old Town many restaurants and cafes invite you to a break. The region is characterized by numerous lake and forest areas through which you continue the drive to the Pomeranian Lagoon in Kamień Pomorski. The small town is picturesquely situated in the Pomeranian Lagoon and famous for its Gothic Cathedral with a magnificent organ. Visitors are fascinated by their wonderful sound and the moving figures. Here, from mid-June to late August organ and chamber music festivals are held every year. Overnight in the Kamień Pomorski area.

(Distance app. 220 km) After breakfast drive to the cliffed coast on the Island of Wolin, the largest of all Polish islands. The cliff is constantly undermined by water and shows a fascinating nature spectacle. Largest part of the island is the Wolin National Park with an imposing, up to 95 meters high cliff and for post-glacial lakes. Naturally protected species of orchids, beach thistle and honeysuckle are flourishing in the park. Of the 200 species of birds, eagle, ruff and mute swan are most important. Worth a visit is the bison show park as well as the famous spa and holiday resorts Międzyzdroje and Świnoujście. As one of the top spa resorts in the country, Świnoujście is popular because of its white sandy beach and a special location. The waterside promenade with its beautiful spa villas is perfect for leisurely strolls. On low traffic roads, you drive along the coast line to Trzęsacz, a famous holiday resort with a high cliff and a Gothic church known as „Sea bride“. From the brick church, which was 6 centuries before 2 kilometers far from the beach, only a residual part is obtained, as the Baltic penetrated deeper and deeper inland, so that the steep bank came up to the church up to 1 meter. A little further on, in Rewal, a funny and interesting ride on the narrow gauge railway is possible. Anyone interested in this topic can visit the narrow gauge railway museum in Gryfice, about 30 kilometers away. Drive to Kołobrzeg, most famous Polish Baltic spa resort and important sea port. It is especially nice to stroll down the Old Town and the beach promenade is lined with countless restaurants, bars and cafes. In the sesaon, the port of Kołobrzeg is starting point for boat trips on the Baltic Sea. Most valuable monument of the city is the Cathedral and in the spa district there are over 30 sanatoriums and health clinics. Overnight in the Kołobrzeg area.

(Distance app. 220 km) You continue the drive eastwards to Koszalin, most important city in the region. On a nearby hill, once a pagan worship, is a popular vantage point. Next stop, Darłowo, is 80 kilometers from here, was one a fishing village, member of the Hanseatic League and houses a superb Gothic castle. In the past, the castle was a residence of Pomeranian dukes and is now used as a regional museum. The medieval town with market place, streets and buildings from 300 years of ducal dominance remains in good condition and in the holiday quarter Darłowko a lighthouse can be reached over a drawbridge. Last programme of today is a round trip through the „Checkered Land“, a region with over 2,500 old half-timbered houses. In a goat farm, you will lern about farming, fostering und care of the animals and try fresh goat milk and goat cheese. In the neighboring village you visit a traditional farm with a beekeeping. Do not worry – an experienced beekeeper is with you! Of course, the beekeeper provides you with information on his daily work and will present fresh honey to you. Today’s overnight is planned in the Słupsk area. The cityscape of Słupsk is dominated by medieval buildings. One of the oldest mills in Poland, the remains of the city walls and the Gothic castle are most famous sights.

(Distance app. 270 km) In good weather, you should visit the Słowiński National Park today, which covers the area around the two lakes Gardno and Łebsko. Biggest attraction of the park are the shifting dunes, which uncover fossilized tree stumps during their migration. The biggest shifting dune is 42 meters high and has an overall dimension of hundreds of sports fields. Because of its rare flora and fauna, the park is one of UNESCO protected biosphere reserves. The viewpoints on the lighthouse in Czołpino and on Mt. Rowokół are more than just a hot tip and definetly worth a visit. On your motorcycles you are approaching the next stop on the Hel peninsula, that lays like a tongue in the Bay of Gdansk and protect the hinterlands from excessive stormy sea. Beautiful beaches and picturesque harbors are not only found in the popular seaside resorts. Those who want to learn more about the fate of shipwrecked, will find useful information in the Museum of Sea Rescue in Władysławowo. At the gates of Gdańsk, there is located the city of Sopot, one of the most prestigous Polish seaside resorts. The Art Noveau buildings and the promenade are worth a visit but main attraction of Sopot is the largest wooden pier in Europe. Overnight in the Gdańsk area.

(Distance app. 200 km) The first two hours after breakfast are dedicated to the Old Town of Gdańsk. Gdańsk look back to a thousand years of history in which the city benefited from their openess to Polish, Kashubian and German influences and cultures. It was one of the most important and is today one of the most beautiful Hanseatic cities at the Baltic Sea. Evidence are numerous splendid buildings and the „Crane Gate“ became a landmark of Gdańsk. Spectacular is the St Mary’s Church, with space for up to 25,000 people the largest Baroque church all over Europe. Other famous attractions are Long Market, High Gate, Artus Court and Neptun Fountain. Do not miss a visit to the Gdańsk shipyard, where the Union „Solidarność“ was founded by Lech Wałęsa! It was workers from the Gdańsk „Lenin Shipyard”, who started demonstrations and protests against the communist regime, which ended glorious with the fall of the former Soviet bloc and the Berlin Wall. Also, Gdańsk is known worldwide as the capital of amber. Even in ancient times, the „Gold of the Baltics“ was transported from Gdańsk along the Amber Route to Southern Europe and Egypt. More about the collection and processing of amber you will find out at the Amber Center on Sobieszewo Island, where you can watch the professionals at work. But now it is high time for departure, because in Malbork around 60 km away, you will be met by our guide for a castle tour. As Europe’s largest medieval castle, built by the German Teutonic Knights, the impressive brick building is entered on the list of UNESCO World Heritage Sites. The biggest attractions are the massive defensive wall with its bastions and gates, the late Gothic Grand Master Palace and a lot of exhibitions. After a break in the castle cafe you are leaving to Warmia, where the next highlight is waiting for you. Here you have the option for a boat trip on the Elbląski Canal, which celebrated its 150th birthday in 2010 and is a valuable monument of hydraulic engineering as well as a tourist attraction par excellence. His world’s only in-service technical facilities such as inclined planes, security gates and locks exites a large interest over again. To cope with the enormous difference in the height of the water level of up to 100 meters, 5 inclined planes on a length of 100 kilometers were built, thanks to the ships are transportade on a special railway vehicle over land. Another stopover can be planned in the village of Kadyny. In the wonderful holiday resort, there is a summer residence built by the German imperator William II, which has today been converted into a hotel. Now, you are already in the middle of East Prussia just a stone’s throw away from the Russian border in the Kaliningrad territory. The small town of Frombork houses the largest church complex in the region and in the Cathedral Castle Nicolaus Copernicus spent his most important years of life and creativity. His scientific works can be admired in the Bishop’s Castle, which is surrounded by Gothic defensive walls. From here you have a fantastic view of the Vistula Lagoon and Vistula Spit – Poland’s most deeply situated point. During the tourist season, boat trips to the biggest cormorant colonies in Europe can be organized. Overnight in the Frombork area.

(Distance app. 380 km) After you have reached yesterday the deepest and at the same time easternmost point of you journey, you are now driving westwards. With the motorcycles you pass the lakes and endless deciduous and mixed forests of Kashubian Switzerland. The charming scenery is surrounded by mellow moraine hills. The region is also known for its folk art and handicrafts and information on the Kashubian culture can be found in the Ethnographic Park in Wdzydze Kiszewskie. Main town in the area is Kartuzy, whose name is derived from the Carthusian Monks, a church order with particulary strong connection to the afterlife. So, the church of the no longer operated monastery surprises with a roof in the shape of a coffin… However, this should not be a bad omen! More lively, the Kashubian Musueum presents its traditional handicraft products and is absolutely worth a visit. Furthermore, here you can listen to folk music, admire unusual instruments and try Kashubian tobacco. Popular souvenirs are porcelain and embroideries. After lunch break, continuation of the journey to the Pomeranian Lakeland area, where you cruise with your motorcycles on prettiest roads through an unspoiled nature. Overnight in the Połczyn Zdrój area.

(Distance app. 90 km in Poland) On the short drive to the German border you pass the city of Stargard Szczeciński, known for its numerous Gothic buildings. Around the Old Town you can find medieval city walls with bastions and three gates. At the market square, the late-Gothic Town Hall and the Baroque town houses are worth a visit. Depending on your destination, we organize a stopover on request.